One of the biggest problem on exit devices in heavy traffic areas are the end caps. Plastic is not usually strong enough to survive for long. We should know, we have sold thousands of them over the last two and half years. So new for 2016, Von Duprin has come out with a Metal Replacement End Cap for the 22 Series. The Von Duprin 22 Mechanism Metal End Cap 900397, and our part # G22R10M.

This New End Cap will replace the Von Duprin 22 End Cap 900981 and Von Duprin 22 End Cap 968601. The end cap is made of a die cast metal is and substantially stronger then the original equipment plastic end cap. The new Metal Cap is finished with a powder coated black paint. The installation is as easy as removing the old end cap and bracket and replacing it with the new end cap and bracket, which have the same hole spacing. The package includes the End Cap, Bracket and the Mounting Screws. 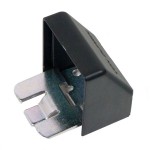 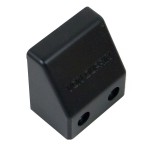